We have a new Saint in the Catholic family today. I am so proud that St. Teresa has finally received the holy honor she deserves. It’s a long process to achieve the Sainthood but I could not be happier about it. At Church this morning we all prayed to her and we also prayed for everyone to receive her love and blessings.

I know a lot of her stories because I’ve read a bunch of books and articles about her life. She died September 5th, 1997. This is from Wiki:

On 10 September 1946, Teresa experienced what she later described as “the call within the call” while travelling by train to the Loreto convent in Darjeeling from Calcutta for her annual retreat. “I was to leave the convent and help the poor while living among them. It was an order. To fail would have been to break the faith.”[44] One author later observed, “Though no one knew it at the time, Sister Teresa had just become Mother Teresa”.[45]

She began her missionary work with the poor in 1948, replacing her traditional Loreto habit with a simple white cotton sari decorated with a blue border. Saint Teresa adopted Indian citizenship, spent a few months in Patna to receive a basic medical training in the Holy Family Hospital and then ventured out into the slums.[46][47] Initially, she started a school in Motijhil (Kolkata); soon she started tending to the needs of the destitute and starving.[48] In the beginning of 1949, she was joined in her effort by a group of young women and laid the foundations of a new religious community helping the “poorest among the poor”.

Her efforts quickly caught the attention of Indian officials, including the prime minister, who expressed his appreciation.[49]

St. Teresa wrote in her diary that her first year was fraught with difficulties. She had no income and had to resort to begging for food and supplies. Teresa experienced doubt, loneliness and the temptation to return to the comfort of convent life during these early months. She wrote in her diary:

“Our Lord wants me to be a free nun covered with the poverty of the cross. Today, I learned a good lesson. The poverty of the poor must be so hard for them. While looking for a home I walked and walked till my arms and legs ached. I thought how much they must ache in body and soul, looking for a home, food and health. Then, the comfort of Loreto [her former congregation] came to tempt me. ‘You have only to say the word and all that will be yours again,’ the Tempter kept on saying … Of free choice, my God, and out of love for you, I desire to remain and do whatever be your Holy will in my regard. I did not let a single tear come.”[50]

St. Teresa received Vatican permission on 7 October 1950 to start the diocesan congregation that would become the Missionaries of Charity.[51] Its mission was to care for, in her own words, “the hungry, the naked, the homeless, the crippled, the blind, the lepers, all those people who feel unwanted, unloved, uncared for throughout society, people that have become a burden to the society and are shunned by everyone.”

It began as a small congregation with 13 members in Calcutta; by 1997 it had grown to more than 4,000 sisters running orphanages, AIDS hospices and charity centres worldwide, and caring for refugees, the blind, disabled, aged, alcoholics, the poor and homeless, and victims of floods, epidemics, and famine.[52] 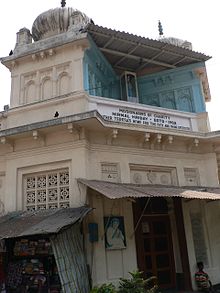 2007 image of Mother Teresa’s Home for the Dying, Nirmal Hriday, in Calcutta.

In 1952, Mother Teresa opened the first Home for the Dying in space made available by the city of Calcutta. With the help of Indian officials she converted an abandoned Hindu temple into the Kalighat Home for the Dying, a free hospice for the poor. She renamed it Kalighat, the Home of the Pure Heart (Nirmal Hriday).[53] Those brought to the home received medical attention and were afforded the opportunity to die with dignity, according to the rituals of their faith; Muslims were read the Quran, Hindus received water from the Ganges, and Catholics received the Last Rites.[54] “A beautiful death”, she said, “is for people who lived like animals to die like angels—loved and wanted.”[54]

As the Missionaries of Charity took in increasing numbers of lost children, Mother Teresa felt the need to create a home for them. In 1955 she opened the Nirmala Shishu Bhavan, the Children’s Home of the Immaculate Heart, as a haven for orphans and homeless youth.[57]

The congregation soon began to attract both recruits and charitable donations, and by the 1960s had opened hospices, orphanages and leper houses all over India. Mother Teresa then expanded the congregation throughout the globe. Its first house outside India opened in Venezuela in 1965 with five sisters.[58] Others followed in Rome, Tanzania, and Austria in 1968; during the 1970s the congregation opened houses and foundations in dozens of countries in Asia, Africa, Europe and the United States.[59]

Very interesting story and choice to live her life in service of God and to all others. I am proud to be Catholic. I do not agree with all of our teachings and morality. But I also believe that my Faith has gotten me to where I am today. I just love God. Without God I always feel lost. I’m happy we get today. We can celebrate St. Teresa and remember her good works. She will always be someone I look up to. She is a hero to me and I love her. I hope to be more like her and follow her example.

God bless you all! I love ya’ll and I hope you have a good Sunday. We are going shopping with the boys. We had our first Cubs game yesterday. I was on Dad duty more than I got to watch the game but that’s okay. Because all of the Cubbie fans were so awesome to help me out and also keep me updated on what was going on while I walked one or both of the boys back and forth. They had fun and we took a lot of really cool photos. I put them on Facebook this morning. Great guys day with my boys and my friends! We will do that again next year. I want to make it a tradition.